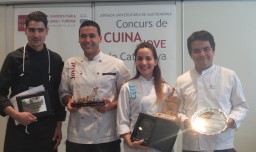 Since 1980, the University School of Hospitality and Tourism in Sant Pol de Mar has organized the University Conference on Gastronomy and, since 1987, the Catalan Youth Culinary Contest. It is the oldest gourmet cooking contest held continuously in Catalonia and one of the oldest in Spain. The aim to to award the title Best Young Chef of Catalonia. Each year a guest chef is President of the jury. In this year’s edition, the chef Albert Adria was chosen and IGCAT’s Director, Diane Dodd (PhD) joined the jury members.

The theme changes every year, this year is the theme was “cooking the micro-vegetables” with sponsorship from Koppert Cress.

Besides chairing the contest, Albert Adrià and chefs from his restaurants made a presentation and demonstration of their culinary skills using the micro-vegetables supplied by Koppert Cress.

The overall winner was Ana Luna Vera Grimaldos who took away two prizes.  The overall prize for Best Young Chef of Catalonia and the Prize for Best Application of micro-vegetables.