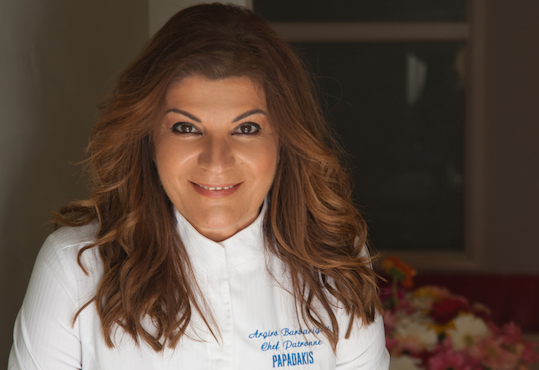 Ambassador for South Aegean, European Region of Gastronomy awarded 2019, chef, TV host, restaurateur, representative of Greek cuisine in countless events around the globe and Best-Selling Cookbook author, Argiro Barbarigou has designed a life, career and brand from Greek cuisine. Starting on her native Paros, where she credits her mother for teaching her not just the techniques, but also the soul of Greek cooking, she now shares her love for Greek gastronomy in countless moments with millions of fans and customers.

Known throughout Greece as the ‘First Lady of Greek Cuisine,’ celebrity chef Argiro Barbarigou will chair the jury of the European Young Chef Award 2019, to be held in Rhodes on 22-24 October, hosted by South Aegean, European Region of Gastronomy awarded 2019.

If ever a human being could bottle and export the essence of Greek food and the spirit it embodies, that is Argiro. She has devoted her life’s work to sharing the secrets from Greek cuisine – modern and ancient – with her audience and fans around the globe, and now she shares her experience with growing chefs from Europe’s esteemed kitchens.

Since her designation as chair of the jury of the European Young Chef Award 2017, Argiro has strongly supported the competition and its key principles by promoting innovation on traditional cuisine, stressing that local food cultures are an important source of innovation; by highlighting sustainable food cultures, as sustainable local, regional and global food systems are important for all our futures; and by committing to create future chef ambassadors for the regions and their local food products.

Following in the footsteps of her grandparents, Argiro opened her first restaurant, Papadakis, in the mid-90s on the Aegean island of Paros, where she was born. Travellers flocked to her restaurant: day trippers from Mykonos and other islands, mixed with global glitterati, yet they all drank from the same simple glasses and ate her innovative while authentic food.

It was here, that she found her core ideal ‘The essence of good food lies in food memory, innovate while staying true to your authentic flavours.’ For Argiro, cooking means familiar flavours in fresh, glorious tastes, open-handedness, warmth and innovation that adheres to traditional flavours. It is these ideals that she has shared through her cooking, books, restaurants and TV shows, and it is her greatest goal to export this ethos to the world.

Today, that culinary journey culminates at her second wildly successful Papadakis restaurant, set at the foothills of Mt. Lycabettus in the heart of Athens. Many say they first came for Argiro’s signature cuisine, but they return for her authenticity and infectious personality.