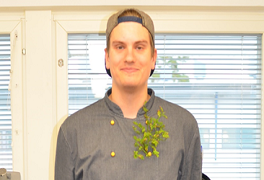 Josi Polso is the talented young chef who will represent Kuopio at the forthcoming European final. With Kuopio having just been awarded European Region of Gastronomy 2020 in Brussels, Josi is hoping to bring another accolade home for the region.

Innovation on tradition is the theme of the competition under the auspices of the top Catalan chef Joan Roca, member of the jury in 2016 and Ambassador of the event.

Josi Polso is a third-year Hospitality and Tourism student at the Savonia University of Applied Sciences in Kuopio. Food and beverages are his focus fields and he describes his relationship with food as a natural connection as he loves to be creative with raw materials. Food is a family affair for Josi. Family is where his love for food started, when during his childhood he used to cook and collect mushrooms with his parents. He told us that his “dream for the future is to open a restaurant” so we hope the competition will provide a springboard to reach his dream.

The traditional recipe Josi will innovate, is Blueberry pie, and as promised by the young chef the blueberries will come directly from the wood nearby to Kuopio city.

Josi will join the participants from other European Regions of Gastronomy in a competition where each region will be represented by an aspiring chef who will prepare an innovative dish based on local food and/or traditional recipes.

The Greek celebrity chef Argiro Barbarigou from the winning 2016 South Aegean region will preside the international jury panel and Stamatios Misomikes, the winner of the European Young Chef Award 2016, will give a Master Class for both finalists and culinary students from EUHT StPOL.

Young Chef Award is a competition organized and promoted by the International Institute of Gastronomy, Culture, Art and Tourism (IGCAT) together with the support of the awarded European Regions of Gastronomy.  The aims of the Award are to: promote innovations on traditional cuisine, highlight sustainable food cultures and create future ambassadors for local food products.