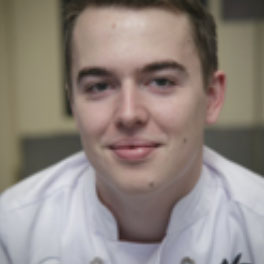 Jan is 23 years old and studied at Venlo cookery school, The Netherlands, where he graduated in 2012. He started his career at a local catering organisation. Motived by a strong desire to learn a more refined cuisine he gained experience in several restaurants in The Netherlands and got the chance to develop his own cooking style. Back to his hometown Someren, Jan started to work in his brother’s restaurant Ons Jongens, where he is currently chef. He enjoys making his own creations with an Asian touch, inspired by the nature of Brabant. Jan was awarded the second prize in the competition thanks to his dish Roots of Parsley, which originated from the traditional Dutch recipe called Stamppot, a mix of mashed potatoes and vegetables.