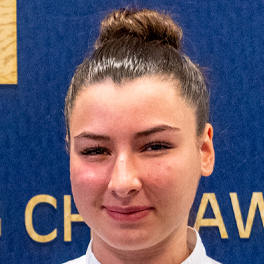 “I am sure that to become good chefs, we have to be open-minded and the best way for achieving that is to travel. I would like to work in different countries in the world. Cooking and travelling will be my life.”

Pauline Place is the young chef who represented Hauts-de-France, European Region of Gastronomy awarded 2023 at the European Young Chef Award 2022.

Born in 2003 in Fourmies, Pauline is the oldest of three siblings. She has played basketball for fifteen years and is a great supporter of team work “because everything is possible when you are part of a determinate team” she claims.

A few years ago, Pauline spent a few days in a restaurant and since then, she knew exactly what she wanted to be: a chef. And to achieve her goal she is studying at Jessé de Forest high school in Avesnes sur Helpe.

Pauline already participated in a culinary trophy in Ireland, so she maintains that “participating in the European Young Chef Award is a new challenge that I want to embrace. Being a woman in the culinary world is also tough, but I love to put myself to test.”