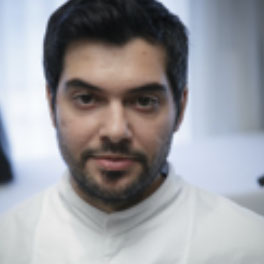 Stamatios is a passionate and very creative young chef. Raised in a culinary family he developed his motivation from a very young age. Surrounded by different flavors and tastes, he learned the basic techniques of cooking as a child. At the age of thirteen he became apprentice chef near his parents. After graduating at the culinary school, he started his professional career near his mentor chef Georgios Troumouchis where he guided and inspired him throughout his career. Stamatios’s career started to take shape at different Michelin starred restaurants he worked for, where he developed his minimalist modern vision of the dining experience. He also had a very close look at the Nordic cuisine and fermentation techniques.

He is now a Head Chef at Noble fine dine restaurant in Rhodes, where inspired by the tradition and the uniqueness of his homeland he has created a menu that narrates the story of a forgotten daily life, in order to trigger emotions and awake memories. He places the roots of his land in a different palette and approaches tradition with an innovative and unconventional way. Stamatios was awarded the first prize in the competition thanks to his dish Salas, coming from the Greek words thalassa (sea) and hálas (salt). Using the techniques of fermentation and smoking, he mixed 19 different local fresh ingredients coming from different South Aegean islands in order to create a unique composition narrating local culinary traditions.