HomeYoung Chef AwardChef Randie Anderson from Jamaica to be in the... 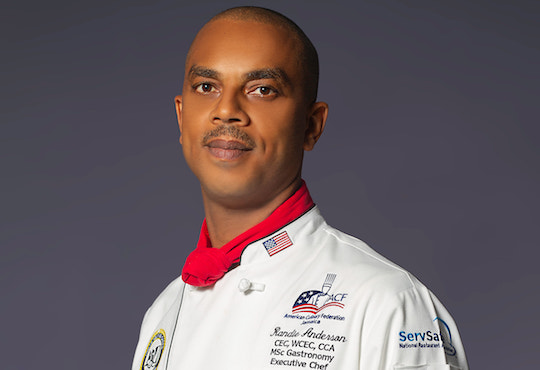 IGCAT Expert and President of the American Culinary Federation Jamaica Chapter, chef Randie Anderson will join the jury of the European Young Chef Award 2021, to be held in Braga (Minho, European Region of Gastronomy awarded 2016) on 23-24 November.

Randie Anderson is Executive Chef and Director of Culinary Services at Montego Bay Convention Centre. He is one of the original members of the Culinary Federation of Jamaica (CFJ), founded in 2007, a member of the James Beard Foundation, a certified evaluator for the American Culinary Federation (ACF) and a WCEC by the World Association of Chefs Societies.

Chef Randie is the current President of the American Culinary Federation Jamaica Chapter and has recently earned his certification in Nutritional Science for The Stanford University School of Medicine.

Throughout his career, he has developed an in-depth understanding of gastronomic tourism and an appreciation for culinary history, culture, tradition, foodways, nutrition, and sustainability, that he shares on his blog Allspice Traveller.

Chef Randie Anderson has been recently appointed as a member of the Chef Advisory Sub-Committee of Jamaica’s Tourism Linkages Gastronomy Network, that supports the Ministry of Tourism in developing Jamaica as a destination of choice for culinary experiences.

In support of the European Young Chef Award, he claimed that “European gastronomy has for many decades influenced other cultures and it is now in the hands of Young Chefs across the globe to preserve, mold and develop gastronomy for the world to experience.”