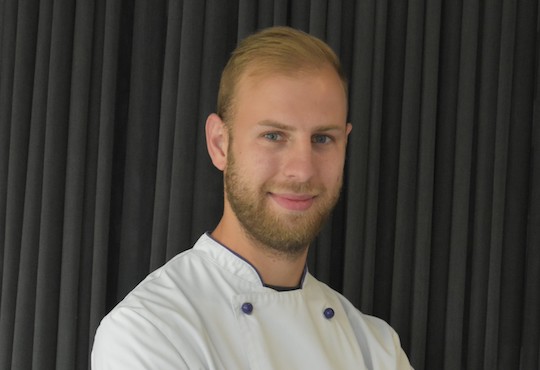 “Despite all of the hardships that have burdened our industry due to the pandemic, I am determined to strive to collect new knowledge and working experience, as I am aware that passion and desire are key to being a successful and happy chef,” proudly states Janko Dulc, the finalist that will represent Slovenia, European Region of Gastronomy awarded 2021 at the European Young Chef Award 2021, to be held in Braga (Minho, European Region of Gastronomy awarded 2016) on 23-24 November 2021.

“I have enjoyed cooking from a very young age, since I started helping my mother with the preparation of our household meals. I was in primary school when I decided I wanted to become a chef.”

To make his dream come true, Janko studied in Radovljica Secondary School of Gastronomy and Tourism in the Gorenjska region, where his hometown Cerklje na Gorenjskem is. He chose the programme with the most practical courses, as he wanted to gain new skills and spend as much time as possible in a professional kitchen. In this period, he also participated in his first culinary competition and gained valuable experience in this field.

His next step was to enroll in Vocational College for Hospitality and Tourism Ljubljana (part of the Biotechnical Educational Centre Ljubljana), where he continued to acquire new gastronomic knowledge and experiences while working and experimenting in his classes, in the school restaurant Kult316 and as an intern in various Slovenian restaurants.

His passion for cooking and competing in culinary arts has increased tremendously after participating in a national culinary contest in his first year of vocational college. There, he prepared a modern interpretation of the traditional dish Leteči žganci (fried chicken thighs), for which he was awarded maximum points by the jury.

During the Covid-19 lockdown, Janko took on the challenge of participating in Slovenia’s local selection for the European Young Chef Award, which was organized online. With a video presentation about the story behind the creation and preparation of his dish, he managed to convince the jury and get a chance to compete at the international level.

As in the local competition, at the EYCA 2021 Janko will present a modern and unique reinterpretation of the traditional Ričet, a barley porridge typical from Central Slovenia, usually prepared with beans, vegetables and sausage, smoked ribs or a piece of smoked pork meat. It is known to be a communal dish with a strong tie to the hiking and mountaineering culture and community.