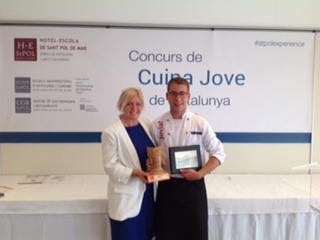 Market cuisine is a culinary style when chefs take daily ingredients from the local markets to prepare their dishes. It is a sustainable way to use not only seasonal products but also use local varieties with all the benefits within. This was the philosophy for the 31st edition of the Catalan Youth Culinary Contest that took place in Sant Pol de Mar on Monday 24 April 2017 when nine young talented chefs from different areas of Catalonia met at EUHT StPOl.

Each contestant was asked to choose a specific local seasonal ingredient and prepare an innovative dish for a panel of gastronomy experts including the well-known Catalan Chef Nando Jubany, owner of Can Jubany* in Catalonia and FOC and FOC Sentosa in Singapur, Dr. Diane Dodd, President of the International Institute of Gastronomy, Culture, Arts and Tourism, Ramón Serra, President of EUHT StPOL, Rosa Mayordomo, Board Member of the Catalan Academy of Gastronomy, Josep Vilella, Gastronomist and Journalist at La Vanguardia and Jaume Cot, Gastronomy journalist from Saber y Sabor.

After the jury deliberation, Pau Gabarró from the Culinary School Joviat, was nominated the overall winner and he will go forward and represent Catalonia in the foryhcomi9ng edition of European Young Chef Award that will be celebrated in November 2017.

Other prizes were given o Jacobo Gutierrez from EUHT StPOL for the best imaginations and creativity and Marc Vivancos from Sant Ignasi Hospitality School for the best presentation and again, Pau Gabarró as the best-skilled dish.

During the afternoon, the competition was followed by a show cooking performance by Nando Jubany.

Since 1980, the EUHT StPOL has organised the University Conference on Gastronomy and, since 1987, the Catalan Youth Culinary Contest. It is the oldest gourmet cooking contest held continuously in Catalonia and one of the oldest in Spain. The aim is to award the title Best Young Chef of Catalonia.

In addition, the Catalan Youth Culinary Contest is the Regional semifinal in Catalonia for the European Young Chef Award, a culinary contest promoted by the International Institute of Gastronomy, Culture, Arts and Tourism and the European Regions of Gastronomy Platform, which aims to promote innovations on traditional cuisine, highlight sustainable food culture and create future ambassadors for regions of gastronomy in Europe.

The next European Young Chef Award will take place on 5-6 November 2017 in Sant Pol de Mar.