HomeYoung Chef AwardRui Meira to represent Minho at the European... 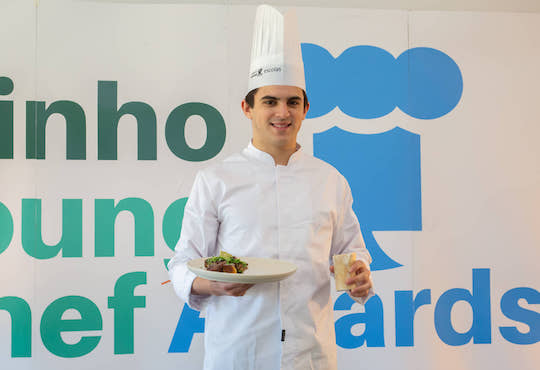 He does not remember when he actually decided to become a cook but, according to his family, he has been talking about it since he was 6 years old. He is Rui Meira, 19 years old, and will represent Minho, European Region of Gastronomy awarded 2016 at the European Young Chef Award 2019, to be held in Rhodes (South Aegean, European Region of Gastronomy awarded 2019) on 22-24 October 2019.

Rui is a Culinary Arts student at Viana do Castelo Hospitality and Tourism School. He started to study cooking at 15 and one year later he did his first internship in a traditional Portuguese restaurant.

Humbleness, teamwork and sustainability are Rui’s key words in the kitchen. He does not like to leave anyone or anything behind and is strongly committed to reduce food waste and find creative solutions of re-use.

His goal is to keep learning by travelling and working in different restaurants around the world.

Winner of the 2019 Minho Young Chef Awards held in May 2019, Rui will compete in the European Young Chef Award 2019 by presenting an innovative dish based on local ingredients from his region, such as bísaro pork and sarrabulho rice.

About the European competition Rui affirmed it is “a unique opportunity to learn, see the culinary culture of other countries and share knowledge.”

The European Young Chef Award gathers finalists of regional contests from around Europe to present and exchange knowledge about traditional dishes and local food products from their regions and then compete proposing their innovative reinterpretation of traditional recipes, judged by star chefs and international experts