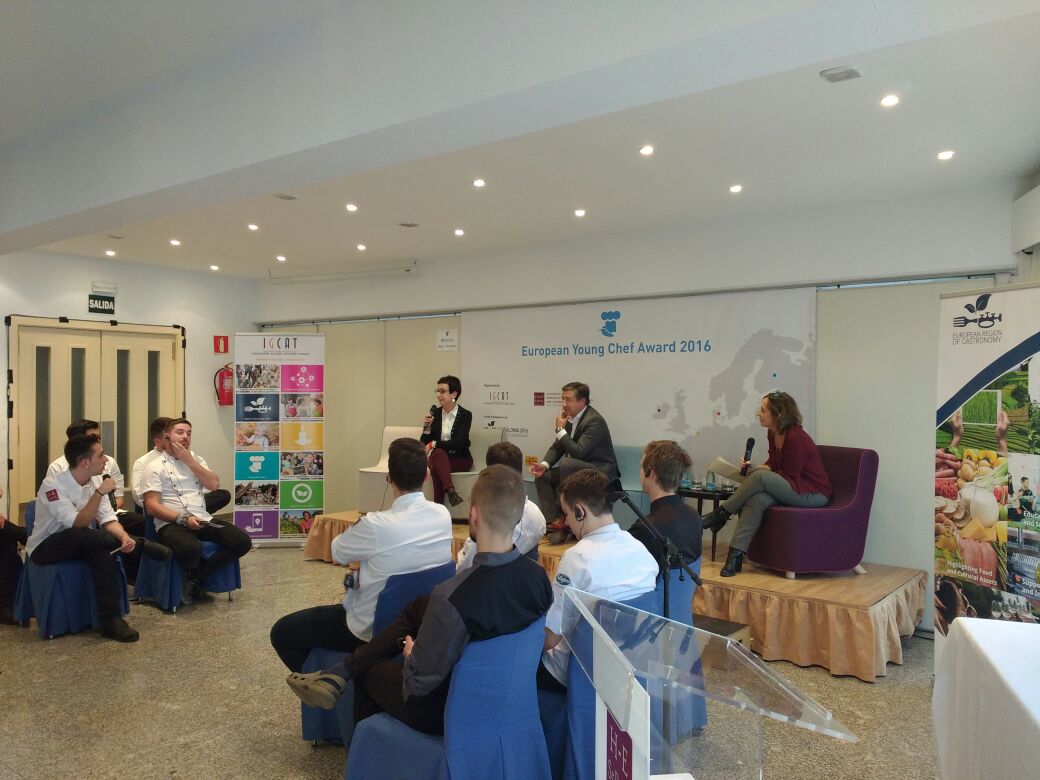 Round Table with celebrity chefs Joan Roca and Carme Ruscalleda

IGCAT’s President, Dr. Diane Dodd reminded everyone that the European Young Chef Award is aimed to champion new local food ambassadors for the future. With worrying global capitalist tendencies driving monoculture production, many fear that we are losing local food varieties which can have devastating consequences on biodiversity, our health, food innovation and local economies. At the same time, the job of chef has become more appealing and glamorous in the public’s eye while the actual work remains just as exhausting as it ever was. The round table with Joan Roca and Carme Ruscalleda therefore aimed to offer the aspiring chefs support and advice in facing current insanely high expectations to innovate and to be local food ambassadors.

Both celebrity chefs champion the need to use and support local good quality food produce while at the same time have introduced many exciting innovations. During the round table, young chefs learnt from their experience, and discovered that love and passion for their work is the guiding principles. At the same time, the young chefs became aware of how they can lead on wider issues of food and cultural diversity.

The round table was moderated by Cristina Jolonch, the renowned Food Journalist of the Spanish newspaper La Vanguardia. She was President of The World’s 50 Best Restaurants for Spain and Portugal in 2015. She has worked on many gastronomy-related projects including the documentary film Snacks – Bocados de una revolución (Snack – Mouthfuls of a revolution) and the book Where celebrity chefs eat?

Joan Roca is owner of the three- Michelin-starred restaurant El Celler de Can Roca, named the best restaurant in the world by the magazine Restaurant in 2013 and 2015. He studied in Escola d’Hosteleria in Girona, where he later worked as a teacher. Together with his brothers Josep (sommelier) and Jordi (pastry chef) in El Celler, Roca offers a fusion of traditional Catalan cuisine with avant-garde techniques, such as Sous-vide, Perfume Cooking, and Distillation. During his career, he received numerous acknowledgements, among them: Cook of the year by the Spanish Academy of Gastronomy (2000); Honorary degree by the University of Girona (2010); Chefs’ Choice Award by Restaurant Magazine (2016). Roca also published several books such as Sous-vide Cuisine and Lifelong Catalan Recipes.

Carme Ruscalleda is owner and manager of three Michelin-starred restaurants: the three-starred Sant Pau in Sant Pol de Mar (Barcelona); the two-starred Moments in Barcelona city which she manages with her son Raül Balam Ruscadella; and the two- starred Sant Pau in Tokyo. A self-educated chef, Ruscalleda offers a cuisine which is strongly based on Catalan tradition though open to world influences, and focuses on quality and seasonal products. During her career, she obtained several recognitions, such as the Golden Chef Award in the Intxaurrondo Gastronomy Week (2002); the Best Chef of the Year from the Gourmet Tour Guide (2004); the National Gastronomy Award for the Best Restaurant from the Real Academia Española Gastronomía (2004); the Best chef Eva International Award (2006); the Don Quijite International Gastronomy Award (2007); the Gold Medal for Merit in Fine Arts from the Spanish Ministry of Culture (2007).

European Young Chef Award is promoted by the International Institute of Gastronomy, Culture, Art and Tourism (IGCAT), and the 2016 edition is hosted by the Escola Universitària d’Hoteleria I Turisme de Sant Pol de Mar (EUHTStPOL). The event is being held within the framework of Catalonia, European Region of Gastronomy 2016and on the 50th anniversary of EUHTStPol.