HomeYoung Chef AwardTim Bressers for North Brabant at the European... 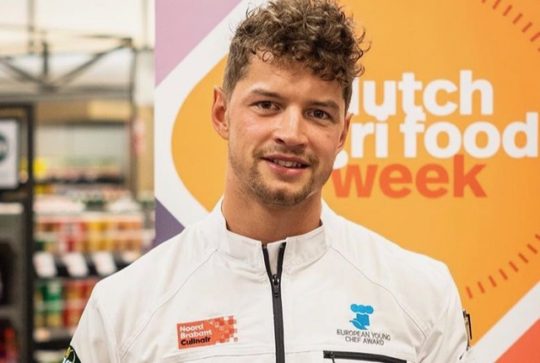 Young Chef finalist Tim Bressers will head to the Galway-Mayo Institute of Technology, GMIT in Galway, Ireland on 26 November to compete for the title of the European Young Chef Award 2018. Tim will represent the Noord-Brabant European Region of Gastronomy 2018 and compete alongside nine other Young Chef finalists from different European regions.

Tim is from Berghem which is in the province Noord-Brabant in the Netherlands. Berghem is a small village situated between Den Bosch (the capital of the province Noord-Brabant) and Nijmegen. After high school Tim chose a general education in restaurant management, tourism and nutrition, followed by a cooking education at the hotel management school ‘De Rooi Pannen’ in Tilburg. After having successfully graduating from this school, he still felt he was “not ready”, so he applied for a student’s position at the famous ‘Cas Spijkers’ Academy in Boxmeer. In order to get admitted to this school he had to attend and compete in a cooking competition.

He was thrilled to win his spot there as the ‘Cas Spijkers’ Academy is one of the best cooking academies in The Netherlands. The Academy is established by and named after Cas Spijkers, one of the best Dutch chefs, who died in the year 2011, at the age of only 65. He was one of the founding fathers of Dutch gastronomy, received a knighthood for his dedication and got appointed as ‘Master Chef of the Century’. It was his ardent wish to establish an education for young culinary talents sharing his passion for the chef’s profession.

At the ‘Cas Spijkers’ Academy Tim has learned a lot from teachers, but he shares that he learned the most from fellow students. As every student works at the best (Michelin star) restaurants all over the country, you can learn a lot just by talking and discussing different concepts, and experiences with each other.

Last year Tim successfully finished the course ‘Specialised chef.’ It was at this point where he felt like he was ready for some more responsibility. When first contacting the chef at restaurant ‘Taste by Dirk’ in Den Bosch, Tim felt immediately comfortable and knew right away this was the right place to develop his skills and get more experience. After a short couple of months of hard work and dedication, he was offered the position of sous-chef. Tim likes to continue learning and working on new dishes with his fellow chefs. As Tim likes to say, “Team work makes the dream work!”

The European Young Chef Award aims to showcase regional and local food products while contributing to raise awareness on healthy eating. It furthermore promotes food as a powerful tool able to re-connect rural and urban environments and to find smart solutions towards regional development through food production and sustainable hospitality industries.