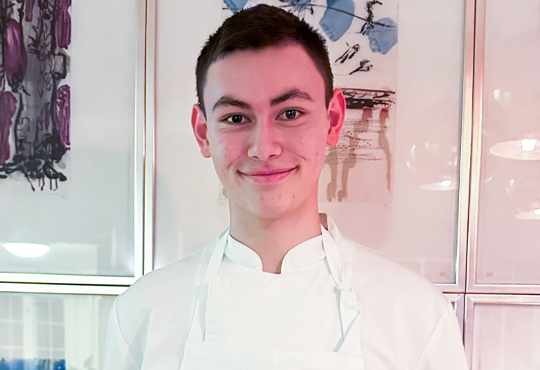 “Nowadays you can get inspired by anything. Something you saw on social media, a thing you heard from a friend or a colleague, traditions, … Mostly, I get inspired by the beautiful quality of the products I use, where they come from and what stories they bring with them” claims Oliver Kim Sørensen, the finalist who will represent Aarhus-Central Denmark, European Region of Gastronomy awarded 2017 at the 6th European Young Chef Award.

17 years old, Oliver has been studying as a chef for 3 years and half, spending 9 months on the cruise ship MS Polarlys, Hurtigruten and 9 months at Alaise restaurant in Oslo. However, he has always been interested in gastronomy and had the chance to experience food from the different European countries where he lived, such as Austria, Denmark, and Norway.

“My dream is one day to become a head chef at my own restaurant and get it into the Michelin Guide. My father is the one who got me into gastronomy; after all he has been working in the top of hospitality for over 20 years. When I investigated gastronomy, I realised that chefs are the coolest role in this service. So, I really look forward to continuing this line of work.”

About the European Young Chef Award, Oliver states: “I really enjoy entering a competition like this. It brings us, the younger generation of chefs, the future of gastronomy, together. It brings us experience, inspires us, and pushes us to become better. I think I am going to learn a lot, both from the competitions and the other finalists, but also from the Norwegian region of Trondheim-Trøndelag.”

At the European Young Chef Award 2022, he will present his innovative reinterpretation of the traditional dish Brænde kærlighed (literally Burning love), a recipe that goes way back to the 1800s. Based on mashed potatoes with a topping of bacon and onions, this dish originated in the rural areas of Denmark where pigs were very popular farming animals. Brænde kærlighed is a Danish expression for really loving someone. In the olden times, there was nothing more loving than giving your family a nurturing, warm and tasty meal. Brænde kærlighed became one of the most iconic dishes in Denmark during World War II, due to the vital role that potatoes played in the everyday diet.