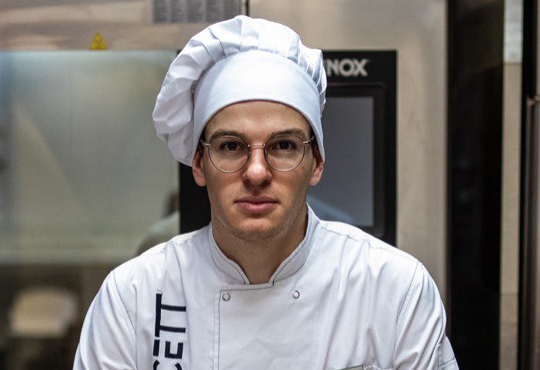 “My goal in the short term is to learn from the great chefs by interning at their restaurants and continuing to study sustainable gastronomy. In the long term, I want to set up a small restaurant in my village that promotes the produce, farmers, and artisans of Menorca” states Pau Sintes, the finalist who will represent Menorca, European Region of Gastronomy awarded 2022 at the 6th European Young Chef Award.

Pau is 22 years old and has recently completed a degree in Culinary and Gastronomic Sciences at CETT-UB, in Barcelona. “Cooking and science have always been my passions, and over the past four years I have been able to merge the two to understand what happens during the culinary process.”

Pau lives in the small Menorcan village of Alaior. His family has always been surrounded by good quality produce, which for him is the most important thing in gastronomy. “My grandmother had the only wood-burning oven in the village, where everyone would come and cook their meals, as well as bake bread and other typical pastries. My father had a small vegetable garden, which provided us with seasonal organic produce all year round. We have a llaüt (small traditional boat in Menorca) so sometimes, when the weather is good, we go out fishing, looking to catch the different types of fish that live around our island, which we fry or stew.”

“Finally, I love picking all the things that nature gives us of its own accord at any given time, like wild asparagus, capers, wild berries, mushrooms and fungi, snails… I suppose that it is because of the great admiration I have for all this produce, and how my mother and grandmother would lovingly prepare it, that I decided to be a chef.”

Pau’s inspiration when creating his dishes comes mainly from his personal experiences and stories he has been told, nature, and music.

“I believe that the European Young Chef Award is a great opportunity to raise the profile of young chefs, not only those of us who take part in competitions, but all those who are working day in day out in restaurants, and to encourage new generations to train as chefs, which is a wonderful profession and needs properly trained people” claims Pau.

At the European Young Chef Award 2022, Pau will present his innovative reinterpretation of the traditional dish Alberginies plenes or Barquetes d’alberginia, Menorcan-style stuffed aubergines. The earliest written record of this recipe dates back to the 18th Century, in the book “Art de la cuina”, by the Franciscan monk Fra Roger. Very popular both for family meals and special events, this dish is deeply rooted in Menorca’s culture and is passed down from one generation to the next. This recipe is typically prepared using a traditional variety of aubergine grown in Menorca: small, purple and round.