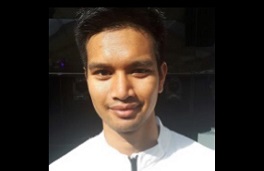 Bon Sawatdee is the 24 years old chef who won the preliminary selection in North Brabant, European Region of Gastronomy 2018. He will compete side by side with young chefs from the European Regions of Gastronomy, on 6 November 2017 for the coveted title European Young Chef 2017. The competition will take place in Sant Pol de Mar, Catalonia hosted by University College for Hospitality and Culinary Arts, EUHT StPOL.

Bon Sawatdee attended the secondary Hotel School in Eindhoven, his fascination for food and cuisine started at an early age and he has worked in professional kitchens since he was 16 years old in order to gain experience. His focus has mainly been on classical french oriented cuisine, but in his dishes he loves to communicate his personal background and traditions. His passion for Asian cooking is, as well, always present in what he creates. He told us he loves to create new recipes working with fish and shellfish and for the competition he will innovate the “Balkenbrij” – a typical Dutch recipe with local crayfish from waters in Brabant, combining it with preparations of pumpkin, an asian vinaigrette and a coconut and lobster foam that is hoped to wow the judges.

The young chef finalists have all been tasked with preparing an innovative dish starting from a traditional recipe using local raw material derived from their native regions.

There is less than three weeks to the competition which will involve an international jury panel presided by the Greek celebrity chef Argiro Barbarigou from the winning 2016 South Aegean region. The winner of the European Young Chef Award 2016, Stamatios Misomikes will return but this time, to give a Master Class for the finalists.

The Young Chef Award is a competition organized and promoted by the International Institute of Gastronomy, Culture, Art and Tourism (IGCAT) together with the support of the awarded European Regions of Gastronomy under the auspices of the top Catalan chef Joan Roca, member of the jury in 2016 and Ambassador of the Award.

The aims of the Award are to: promote innovations on traditional cuisine, highlight sustainable food cultures and create future ambassadors for local food products.