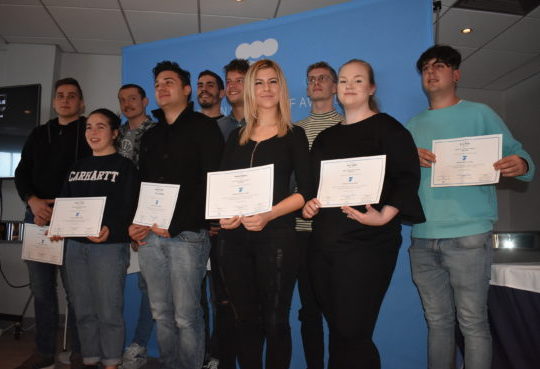 With the aim of raising awareness on the vital role that local food and cultural diversity play in all our regions, finalists in the European Young Chef Award 2018 became today IGCAT Regional Chef Ambassadors. The award was presented by IGCAT Board member and Head of Department for Culinary Arts at GMIT, Jacinta Dalton and IGCAT President, Diane Dodd in recognition of their commitment to the common goal of adopting more environmentally, ethically, socially, culturally and economically sustainable food production and consumption practises. The Young Chefs joined the IGCAT Regional Chef Ambassadors network that gathers European Young Chef Award finalists since its first edition in 2016.

In order to be part of the network, the Young Chefs agree to champion IGCAT’s philosophy and values such as to promote local food products and gastronomic traditions in a sustainable way throughout their future careers. In particular, they commit to: highlight wholesome foods and healthy eating habits; support innovation and creative culinary experiences; endorse opportunities to link rural and urban environments, stress the importance of traditional agriculture and food production methods; encourage stronger synergies between all stakeholders involved in the food and hospitality supply chains; and advocate for the promotion of local products in the regions’ hotels and restaurants.

After signing the agreement, the Young Chefs heated up GMIT’s kitchens to prepare traditional recipes from their regions and to share knowledge about local food varieties and gastronomic traditions. This first cooking round served as a warm up for finalists to compete with innovative dishes the following day, when a jury of international experts chaired by Irish chef JP McMahon select the winner of the European Young Chef Award 2018.  Both events are taking place at Galway-Mayo Institute of Technology in Galway-West of Ireland, European Region of Gastronomy awarded 2018.

The European Young Chef Award 2018 is a competition organised and promoted by IGCAT and hosted by Galway-Mayo Institute of Technology (GMIT) in Galway, Ireland. It counts on the support of world-wide renowned celebrity chef Joan Roca as Official Ambassador. The Award aims to promote innovations on traditional cuisine; highlight sustainable food cultures; and create future chef ambassadors for their regions and local food products.