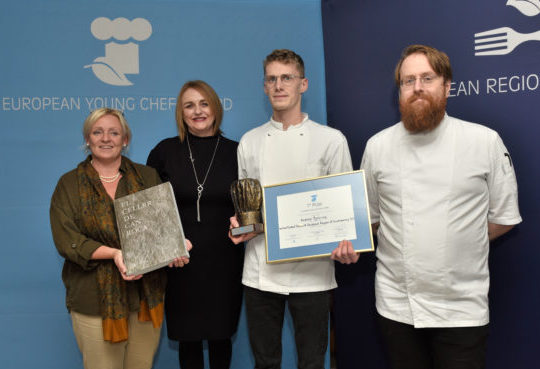 The jury especially appreciated the extensive level of innovation, the storytelling and the connection of the dish to the region. The surprising taste and crispy texture were also important elements in the decision.

JP McMahon congratulated all participants and admitted that the jury had a hard decision to take. He highlighted how all of them have proposed interesting storytelling that came both through their presentations and their cooking. He also stressed how the European Young Chef Award initiative celebrates Europe’s gastronomic diversity.

The European Young Chef Award 2018 was held at Galway-Mayo Institute of Technology (GMIT) in Galway, Ireland and gathered 10 finalists from different European regions:

Sustainable local, regional and global food systems are important for all our futures. The European Young Chef Award therefore aims to stimulate debate about sustainable food and gastronomy practices, production and consumption.

Local food products are often unique to the territory from which they come. Likewise, regional culture creates distinctions that underline the added-value of local products. By giving visibility to emerging chefs that support local products, it is hoped to contribute to a more sustainable and better quality of food experiences.