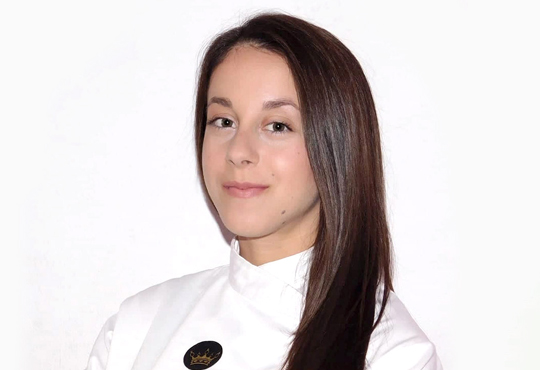 “My dream is to open a restaurant with comfort, healthy, affordable but delicious food for everyone. Food from our land and sea. Food from the South Aegean!” affirms Aikaterini Gonidaki, the young talent that will represent South Aegean, European Region of Gastronomy awarded 2019 at the 6th European Young Chef Award.

26 years old, Aikaterini comes from a traditional fishermen family from Patmos, in the Dodecanese. Since she was a child, she has always admired her mother and grandmother cooking and tried to help them so that she could learn how to cook herself.

Aikaterini has recently finished her cooking studies at Anko Academy and started working at Blue Lagoon Resort in Kos. “I feel so lucky because I do the job I love. Basically, I do not even consider it as a job, it is an art, and I am part of it” she claims.

“Cooking in Greece is a ritual. A ritual whose ultimate goal is to please our family, friends and customers. The most important thing to me is to make people forget about their problems while eating my food and make them smile. That’s majestic!”

“Participating in the European Young Chef Award is a dream come true for me, as I never thought I could achieve this goal of mine. I am very excited about the opportunity to get an international jury to taste my food, my memories, my Apocalypse of the Aegean!”

At the European Young Chef Award 2022, Aikaterini will present her dish Apocalypse of the Aegean, an innovative reinterpretation of the traditional recipe Kakavia that fishermen used to prepare on their same boats using different kinds of small fish, crabs, shrimps, and vegetables such as potatoes, carrots and tomatoes. A simple dish but with a tremendous taste because all ingredients are boiled into sea water.