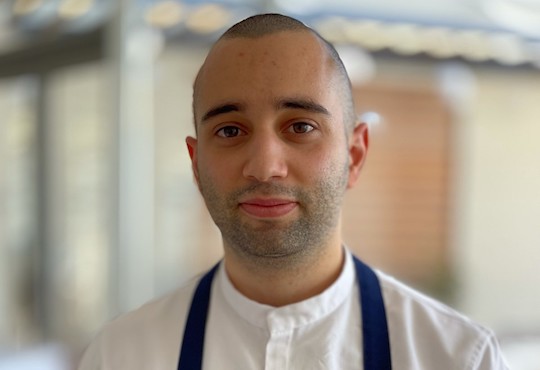 Born in 1996 on Rhodes Island, Andreas has grown his passion for cooking since his early years, with his grandmother teaching him the traditional cuisine from the South Aegean and his mother preparing cakes for special occasions.

After studying at culinary school, Andreas upgraded his skills by travelling across Europe, attending several gastronomy seminars and volunteering at many food events, thus gaining a remarkable experience in the hospitality industry, despite his young age.

A tireless young chef, he is always looking for new experiences, techniques and ingredients, but with a constant eye on the traditional cooking style he learnt from his mother and grandmother.

What motivates him is the dream to open his own restaurant one day where to transmit his idea of cooking and serve local, seasonal, healthy, tasty and innovative dishes to his guests.

At the EYCA 2021, Andreas will present a reinterpretation of Lakani, a typical festive Aegean dish based on braised goat meat and chickpea trahanas cooked in a traditional ceramic pot called lakani and served with yoghurt and feta cheese. He chose this recipe because: “it is an ideal ambassador of the Mediterranean diet, respecting the seasonality of the ingredients, as well as their harmonious cohesion, with the ultimate goal of highlighting the South Aegean Region gastronomic and productive wealth.”