HomeYoung Chef AwardChef Paul Newman from Scotland to join the... 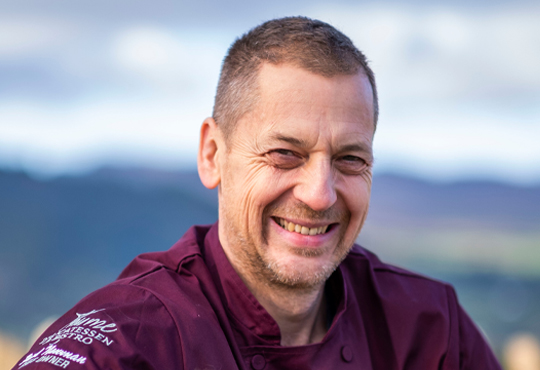 Named Scotland’s ‘Sustainable Chef of the Year 2022’ by the Rare Breeds Survival Trust in Scotland, Chef Paul Newman will participate on the jury for the of the European Young Chef Award 2022, to be held in Trondheim-Trøndelag, European Region of Gastronomy 2022.

As an international Chef, Paul has run teams of chefs for some of the biggest global names in the hospitality industry. Having spent a considerable part of his career in international locations, especially on the continent of Africa, Paul’s cooking is heavily influenced by the flavours from around Africa, as well as the Mediteranean.

A fierce advocate of food provenance and the Slow Food movement, relocating to Highland Perthshire’s Errichel Farm to establish his ‘Thyme Deli & Bistro’ has allowed Paul to put his philosphy into action, with ethically-reared native rarebreed livestock including Shetland Cattle, Shetland Sheep, and Large Black Pigs utilised in many of the dishes served at Thyme. Paul is closely involved in the work of Errichel Farm, with his most recent project being the establishment of a new Slow Food ‘Ark of Taste’ orchard of native, heritage apple trees.

Paul also produces a range of award-winning foods, including home-reared biltong and pastrami, and award-winning pickles, preserves, and chutneys, many of which have acheived stars from the UK’s ‘Great Taste’ organisation, including several acheiving the triple star, Great Taste’s highest accolade.

In support of the European Young Chef Award 2022, Paul stated – “It’s an honour to be a member of the jury in this year’s competition. Nurturing rising Chefs and ensuring they understand that a great dish is made long before the food ever reaches a kitchen has always been really important to me. It is great to give young chefs a forum to compete, share skills and ideas and showcase regional and local produce. I look forward to experiencing inspired dishes from Europe’s most talented Young Chefs.”