HomeYoung Chef AwardChef Sonakshi Kanoria to join the jury of the... 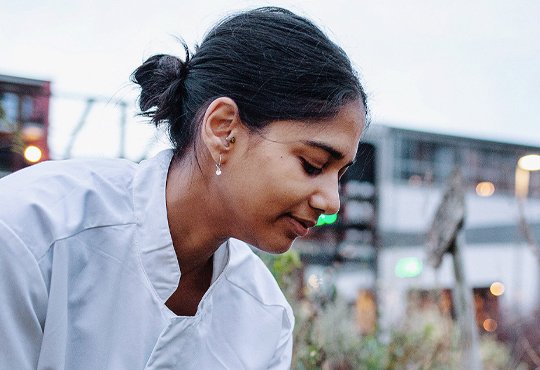 Chef Sonakshi Kanoria to join the jury of the EYCA 2022

Chef Sonakshi Kanoria from Credo restaurant will be a member of the jury of the 6th European Young Chef Award, to be held in Trondheim (Norway) on 10-13 November 2022.

Sustainability has always been a main concern in Sonakshi’s professional career, and is also a top priority at Credo that, besides being featured with one star in the Nordic Michelin Guide, was also the first in Norway to get a Michelin Green Star for gastronomy and sustainability.

By working under the guidance of owner of Credo, chef Heidi Bjerkan, Sonakshi has learnt to put the spotlight on where the ingredients come from: “Credo’s heart lies where the raw materials are produced, it is the farmers who are the heroes and the producers who should shine” she explained.

“The menu is curated from ingredients growing in the region, from Skolberg Sondre farm and our seasonal garden outside the restaurant. Working as a chef at Credo, I do not only cook, but also help with farming and harvesting during the season.”

In Spring 2022, Sonakshi got a scholarship at Mad Academy (Copenhagen) to join the Business and Leadership programme, and in September she cooked alongside Chef Prateek Sadhu and Chef Larry Jayasekara at Arktiskmat (Arctic Food) symposium in Mosjøen.

Born and raised in a joint family in Kolkata (India), Sonakshi spent all her childhood and adolescent years in the living room, browsing through her mother’s secret stash of classic cookbooks, and observing her, in her world full of flavours, trying to sneak a taste of every dish that exited the kitchen. In no time, she started experimenting in the kitchen and making her own lunchbox for school, realising that becoming a chef and diving into the world of gastronomy, was her true calling.

After graduating from the best culinary institute in India, Sonakshi got the opportunity to work at Masque, an ingredient-driven restaurant in Mumbai, co-owned by Chef Prateek Sadhu and featured in the 2022 Asia’s 50 Best Restaurant Awards at No 21.

“Working at Masque, where I met and collaborated with world renowned chefs, changed my perception of food and preservation. It educated me about diverse food cultures, the importance of seasons and fresh local produce. It made me realise the responsibility a chef holds in consciously creating a waste free kitchen and learning how to use an ingredient to its fullest,” affirmed Sonakshi.

“The European Young Chef Award is a springboard for many upcoming young chefs, a platform that helps them showcase their creativity and skill set among the top professionals in Europe,” concluded Sonakshi, who wishes all the competitors the very best and encourages them to “cook what you believe in, tell us who you are on that plate.”