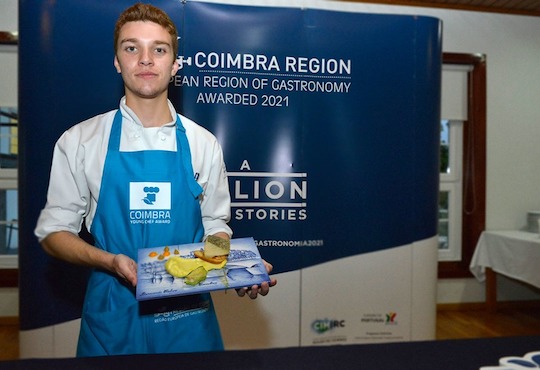 The innovative recreation of a traditional Christmas Eve recipe from the region of Arganil earned Bernardo Calvo a place as finalist to the European Young Chef Award 2019 in representation of Coimbra Region, European Region of Gastronomy awarded 2021.

His dish Bacalhau, Galega e Alho (Codfish, Galician Cabbage and Garlic) was inspired by Bernardo’s personal experience and merges his current university life in Coimbra with his memories of the region where he used to spend Christmas as a child.

Based on the theme Tradition and Innovation, Coimbra Region Young Chef Award took place on 24 May 2019 in the Hotel and Tourism School of Coimbra (Escola de Hotelaria e Turismo de Coimbra) and gathered six finalists who presented their dishes in front of a multidisciplinary jury including experts in culinary arts, gastronomy, tourism, hospitality, and arts.

Evaluation criteria spanned from the originality of the dishes, their history and connection to the territory, to the complexity of the recipes, the technical innovation and the level of innovation on the original recipes. A written English test was also part of the competition.

18-year-old student from the Hotel and Tourism School of Coimbra, Bernardo Calvo will compete with finalists from other awarded and candidate European Regions of Gastronomy in the European Young Chef Award 2019 to be held in South Aegean, European Region of Gastronomy awarded 2019, on 22-24 October 2019.

Candidate and awarded Regions of Gastronomy from Europe, guided by IGCAT, are working together with the long-term aim to contribute to better quality of life by raising awareness about the importance of cultural and food uniqueness; stimulating creativity and gastronomic innovation; educating for better nutrition; improving sustainable tourism standards; highlighting distinctive food cultures; and strengthening community well-being.