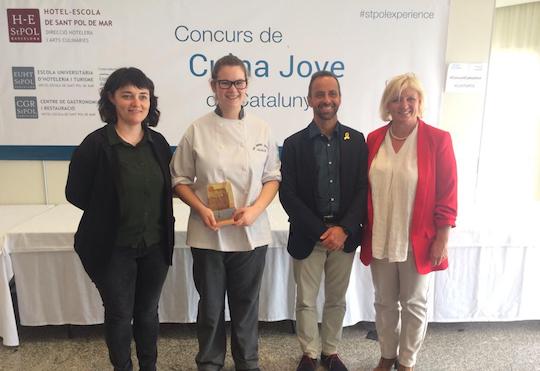 With her reinterpretation of the dish Maduixes amb nata (Strawberries with cream), Mariona Rodà has been selected as Catalonia’s finalist to the European Young Chef Award 2019. The recipe earned her the prize for Best Presentation at the 33rd Catalan Young Chef Award, held on 8 May 2019 at the Hotel-School of Sant Pol de Mar (EUHT StPOL).

Based on the theme Local Products, the competition gathered ten participants from culinary schools and restaurants from all over Catalonia who created their dishes using seasonal ingredients from the region.

President of IGCAT, Dr. Diane Dodd formed part of the competition’s jury, chaired by Michelin-starred chefs Javier and Sergio Torres and including: Executive Director of PRODECA, Ramon Sentmartí; Ariadna Ribas, from the Catalan Tourist Board; Member of the Board of the Acadèmia Catalana de Gastronomia i Nutrició, Rosa Mayordomo; gastronome and member of La Vanguardia’s group “5 a taula”, Josep Vilella; and President of the Executive Board of EUHT StPOL, Ramon Serra.

The prize for the Best Presentation was awarded by the Municipality of Sant Pol de Mar and presented by Mayoress and European Region of Gastronomy Ambassador for Catalonia, Montserrat Garrido.

The jury announced Oscar Maillo, from Blanc de Mandarin Oriental restaurant, overall winner of the competition and awarded Mariona Sánchez, from Hotel The One Barcelona with the Imagination and Creativity Prize. Finally, they acknowledged Gerard Lorente, from Escola Joviat as Best Technical Skills prize.