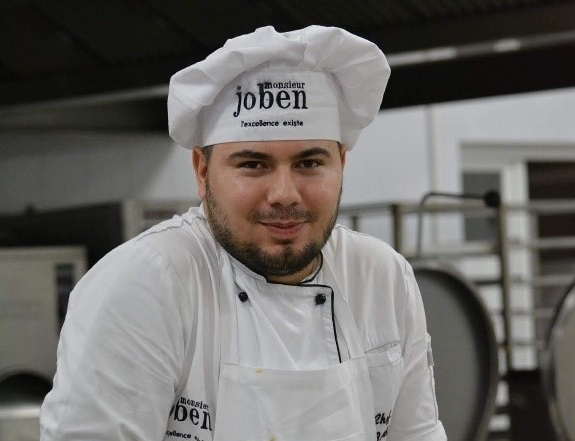 Presenting the Sibiu finalist for the European Young Chef Award 2017

Alin Barabancea is the chosen finalist from Sibiu, European Region of Gastronomy 2019 to participate in the European Young Chef Award 2017. The competition is organised by IGCAT in collaboration with and hosted by the University College for Hospitality and Culinary Arts, EUHT StPOL on 6 November 2017.

Alin is a young chef coming from Mărginimea Sibiului, an area of the Sibiu region in Romania with an exceptional care for heritage and traditions, among which food culture is one of the main attractions. In this rural region, shepherding as an art acquired from ancient times is of valuable importance and techniques have been passed during centuries from father to son.

In the past few years Alin has had the opportunity to work in several restaurants with different approaches to food, this helped him to acquire knowledge in various areas of gastronomy. Alin told us that he feels a  deep bond with his native region and thanks to his learning ad working experiences inside professional kitchens he always tries to find a link between tradition and innovation. He desires to grow as a chef and in the future, he would like to work in a gourmet restaurant sharing with a team the intention to transform dishes into works of art.

Alin is the sixth chef presented till now, he will join the other contestants coming from the European Regions of Gastronomy competing for the coveted title by “innovating on tradition.”  Each young chef will present their creative interpretations on old recipes to the international jury panel, headed by the celebrity chef from South Aegean Argiro Barbarigou.  In the creation of the new dish, the participants need to demonstrate the use of local plant and animal varieties coming directly from their native regions.

The Young Chef Award will be a valuable opportunity for chefs to enhance their career inside a vibrant framework. Here they will have the occasion to share experiences and knowledge and learning from each other’s regional cooking traditions. Moreover, the Award will give them the chance to sign a protocol to be IGCAT Regional Chef Ambassadors. Becoming an Ambassador means commiting to support IGCAT’s message on cultural and food diversity as tool to ensure sustainable futures for regions. The young Ambassador and winner of last year edition, Stamatios Misomikes, will give a masterclass to this year’s participants and he will take part to the Round Table sharing his experience as IGCAT Ambassador.

The aim of the award is to showcase regional and local food products while contributing to raise awareness of healthy eating. Furthermore, there is the deep attempt to promote food as a powerful tool able to re-connect rural and urban environments and find smart solutions in regard to regional development through food production and sustainable hospitality industries.