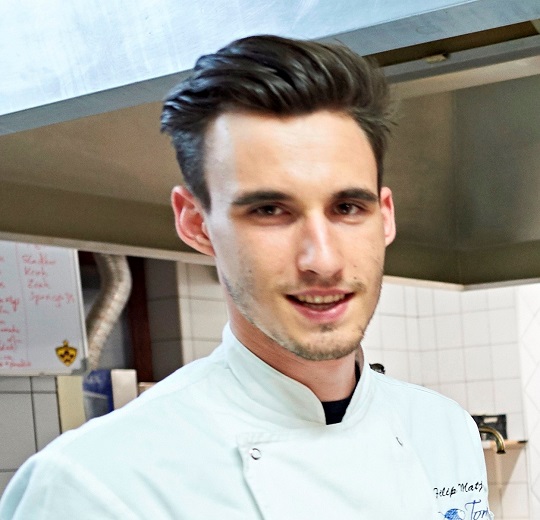 Primorska contestant to compete for the European Young Chef Award 2017

Filip Matjaž is the young chef who will represent Primorska region – Slovenia, which is considering the possibility to join the European Regions of Gastronomy project. It is almost time for the European Young Chef Award 2017, the 8 young chefs are ready to wear their aprons and compete inside the kitchens of the University College for Hospitality and Culinary Arts, EUHT StPOL, for the coveted title.

Filip graduated at the Faculty of Tourism Studies – in Primorska, Portorož with a thesis on Istrian gastronomy, during these years he experienced what working inside professional kitchens means. He is specialized in Istrian and Mediterranean cuisine and through his participation to some international culinary projects as well as gastronomy courses he gained a more holistic understanding of the food universe. He told us that his culinary philosophy is that every meal should represent the location as well as its history and population as a consequence in his dishes he tries to convey a small experience in order to make the guest feel the destination.

On Monday the 8 skilled young chefs will showcase their talent, they will bring with them the local ingredients in order to create a brand-new recipe innovating a traditional dish from their regions. The will make an effort to convey through their new version traditional valuable elements while adding a personal new taste.

The chefs will try to impress and delight the palates of an experienced international jury panel, headed by the celebrity chef from South Aegean Argiro Barbarigou. Moreover, from South Aegean Stamatios Misomikes the last year’s winner will give a Master Class to both the participants and the EUHT students.

The European Young Chef Award 2017 will be also the framework where to discuss focus food related themes during a Round table. In this occasion Argiro Barbarigou, Stamatios Misomikes and Shane Sheedy from the Galway-Mayo Institute of Technology and participant of last year’s edition will share their experiences and will answer to the young chefs’ questions.

The award aims to celebrate the cultural and food diversity in Europe. It considers traditions developed over centuries as the vital ‘DNA’ of food cultures and regional gastronomy as well as local knowledge and important potential tool to innovate products and experiences. It aims to stimulate debate about sustainable food and gastronomy practices, production and consumption.