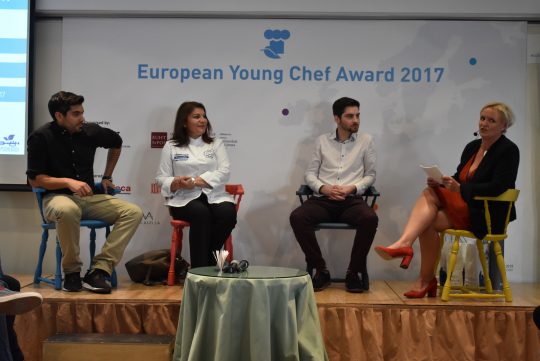 Following the successful second edition of the European Young Chef Award, on 6 November 2017, EUHT StPOL hosted a Round Table event involving Greek celebrity chef Argiro Barbarigou, who shared the stage with Stamatis Misomikes and Shane Sheedy, winner and finalist of 2016 edition to discuss their role in mentoring young chefs and the importance of innovating on tradition.

The eight finalists of the European Young Chef Award 2017 had the chance to engage in a conversation with the three chefs, who shared their experiences and know-how to advise the young talents for their future careers.

Moderated by IGCAT’s President, Dr. Diane Dodd, the Round Table focused on the importance of using local, seasonal food products in professional kitchens, as well as engaging in a ceaseless dialogue with the past. According to Argiro Barbarigou, constant research and a deep knowledge of local culinary traditions, ingredients and tastes is what allows thoughtful and meaningful innovation to take place without losing one’s own identity, as Stamatios Misomikes also remarked.

The significance of education and the connection between local products and health was introduced by Shane Sheedy, who highlighted the role of young regional chef ambassadors in supporting wholesome eating and committing to educate and raise people’s awareness on these topics, especially the younger generations.

Argiro Barbarigou also addressed the issue of gender in the field of professional gastronomy, encouraging young female chefs to pursue their passion and not to be disheartened by the difficulties they might encounter on their way, especially in terms of private and professional life balancing.

She then concluded her intervention by suggesting the young chefs to “focus on your dreams and do not let anybody cut your wings. Sometimes you will feel like you want to quit but, once you will pass this stage, you will see it was worth it.”

Further inspiring words came from Stamatios Misomikes, who encouraged the finalists to “be passionate, be yourself and follow your dreams,” and Shane Sheedy, who pushed them to “never forget your roots and where you come from. Be humble.”

The Round Table concluded with encouragement words to the young chefs from Cáit Noone, Head of Galway International Hotel School at Galway Mayo Institute of Technology (GMIT) and member of the international jury of the European Young Chef Award 2017, who officially announced that 2018 edition will be held in Galway-West of Ireland, European Region of Gastronomy 2018.

Argiro Barbarigou is chef and owner of Papadakis Restaurant in Athens (Greece). She presents a daily cooking show on Greek national television and runs the number one cooking website in Greece. Known as the “First Lady of Greek Cuisine,” she is a strong supporter of the use of local food produce, choosing every day what she identified as “the best diamonds from each region” of her country.

Raised in a culinary family, Stamatios Misomikes developed his motivation from a very young age. After graduating at the culinary school, he started his professional career and worked in different Michelin-starred restaurants. After winning the European Young Chef Award 2016, he committed as IGCAT Regional Chef Ambassador for South Aegean. He is now Head Chef at Noble gourmet restaurant in Rhodes, where he approaches tradition in an innovative and unconventional way to create unique compositions narrating local culinary heritage.

Shane Sheedy completed a bachelor of Business in Culinary Arts and Hotel Management at Galway Mayo Institute of Technology (GMIT). He worked for Alain Ducasse at Dorchester and Gordon Ramsay’s Royal Hospital Road Restaurant, the only three-Michelin-starred restaurants in London. After participating as a finalist in the European Young Chef Award 2016, he became IGCAT Regional Chef Ambassador and started to collaborate with GMIT in several projects aimed at promoting local food traditions, healthy eating, and food education for children and young people.

The European Young Chef Award is promoted by the International Institute of Gastronomy, Culture, Art and Tourism (IGCAT), and the 2017 edition is hosted by the University College of Hospitality Management and Culinary Arts (EUHTStPOL) in Sant Pol de Mar, Barcelona.