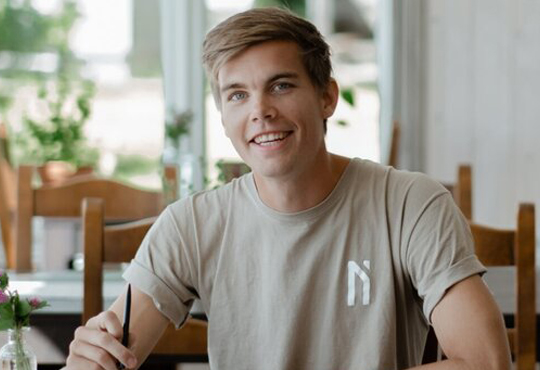 Owner of restaurants Nästgårds and Bua in the Jämtland region of Sweden, chef Johan Rudsby will be a member of the jury of the 6th European Young Chef Award, to be held in Trondheim (Norway) on 10-13 November 2022.

Johan’s career as a chef started 11 years ago alongside his studies to become a social scientist in Uppsala. His interest in cooking grew more and more, together with his fascination for what food is and what it could be. After a couple of years working in different restaurants and cooking on yachts in the Mediterranean, he was ready to move back home.

In 2017, he started to build Nästgårds restaurant on his parents’ farm and opened its doors in 2019. Nästgårds (a pun that roughly translates to short distance or neighboring farm) offers a set 10-course menu based on seasonal produce and meat grown on the spot and on the farms close by. Many of the dishes incorporate different weeds and wild plants foraged in the area as a way of expressing the flavour of Jämtland.

The main reason why Johan felt urged to start his own place was to fully express the way he felt about the food industry: “My aim is to be able to give ingredients the respect and reverence they deserve, and to prove that it is possible to cook in a sophisticated way that is familiar, yet surprising to our guests. I wish to provide an inclusive place of work where everyone is heard, respected, happy and inspired to experiment and evolve. In short, a rather holistic approach. Respect for humans, livestock and produce.”

Johan has recently opened Bua, a small bistro in Östersund with a warm and welcoming atmosphere. With a special focus on organic wines, the restaurant also offers local produce and meat.