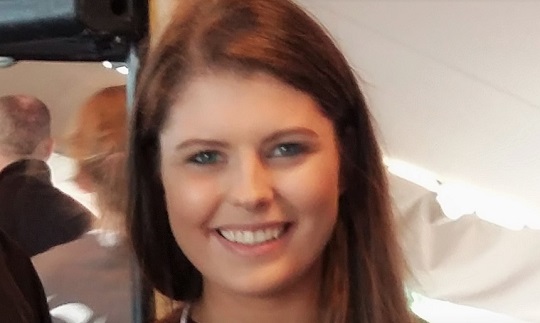 Aisling Rock is the young chef who won the preliminary round in Galway – West of Ireland, European Region of Gastronomy 2018. In two days, on 6 November, she will represent her region at the European Young Chef Award 2017 at the University College for Hospitality and Culinary Arts, EUHT StPOL, Sant Pol de Mar, Barcelona.

Aisling Rock, is a 21-year old Culinary Arts student at the Galway International Hotel School at the GMIT. When she was 16, she took a part-time job in a restaurant in the heart of Burren, a Galway neighbouring region. This region showcases key features from heritage, cultural, touristic and gastronomic points of view. Here Aisling discovered her passion for cuisine and she decided to start her professional studies in culinary arts. She told us that once she will finish her studies she would like to move to London to gain further experience with the dream, one day, to open her own restaurant.Aisling will be the only female chef to compete for the coveted title and she will count on the support of Shane Sheedy, IGCAT Young Chef Ambassador and participant of the last year’s edition who mentored her for the competition. Moreover, she will have the opportunity to meet and get inspiration from the ‘First Lady of the Greek Cusine’, the celebrity chef from South Aegean Argiro Barbarigou, who will preside the international jury panel.

Innovation on tradition will be the focus of the competition that aims at the valorisation of raw ingredients typical from the participants’ native regions. Young chefs will be challenged to creatively combine them according to their personal, innovative reinterpretations of their regions’ traditional recipes. The European Young Chef Award will offer participants the opportunity to engage as IGCAT Ambassadors, following the example of Stamatios Misomikes, winner of last year’s edition, who will share his personal experience with them.

The Award, under the auspices of the competition’s Ambassador and top chef Joan Roca, highlights the richness and diversity of European gastronomy underlining, at the same time, the chefs’ role in promoting sustainability. Finally, it enhances local food cultures as important source of innovation, stimulating debates on how sustainable local, regional and global food systems are important for all our futures.