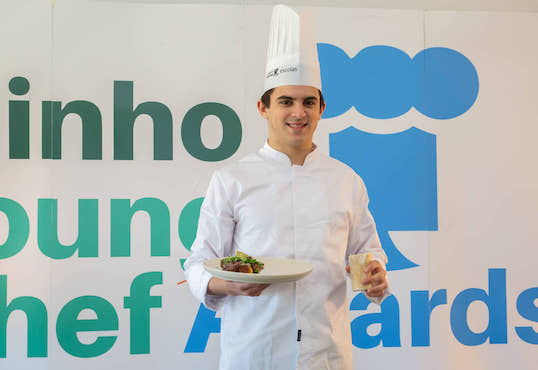 “I chose the sarrabulho because I remember the evenings with my family, the sharing and the hours we spent around the table” claimed Rui Pedro Meira, the young chef who will represent Minho, European Region of Gastronomy awarded 2016 at the 4th edition of the European Young Chef Award, to be held in South Aegean, European Region of Gastronomy awarded 2019, on 22-24 October 2019.

19-year-old student at the Hospitality and Tourism School of Viana do Castelo, Rui Pedro Meira is the winner of 2019 Minho Young Chef Awards (MYCA) that took place on 2-3 May at the AESAcademy of Vila Nova de Famalicão. His dish Mantença do lar do Minhoto (Keeping Minho’s home) surprised the jury with a successful combination of tradition and innovation, and a skillful use of local ingredients from Minho, such as bísaro pork and sarrabulho rice.

“Rui Pedro was a competitor who stood out. He bet on tradition, added originality to it, without distorting the concept. It’s a very minhoto dish” reported Michelin-starred chef and chair of the jury, António Loureiro.

In the coming months, Rui will keep training and working to further improve his dish in view of the European final, which he sees as “a unique opportunity to learn, see the culinary culture of other countries and share knowledge.”