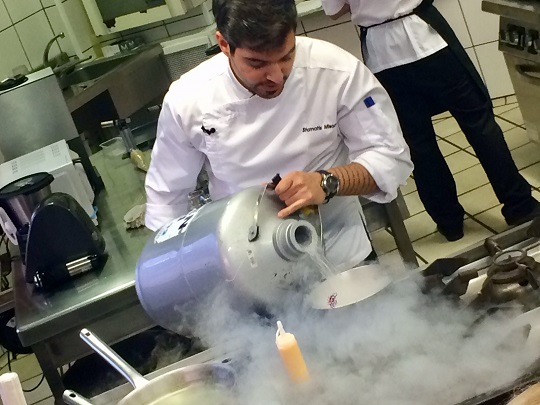 Tradition meets innovation was the topic of the master class held by Stamatios Misomikes, IGCAT Regional Chef Ambassador and winner of the European Young Chef Award 2016, at EUHTStPOL on 5 November 2017. This year’s finalists had the chance to join him in a cooking experience involving the use of local products from South Aegean, European Region of Gastronomy 2019 and to be inspired by Stamatios’s commitment to create new flavour combinations from his region’s gastronomic roots. Opening with Jean Jaures’s quote: “Tradition does not mean to look at the ash, but to keep the flame alive” Stamatios illustrated the path from tradition to innovation. Creativity, development, research and identification are the basic steps in this process.

The Master Class followed the 2017 participants’ presentation and preparation of traditional dishes from the European Regions of Gastronomy. Aprons on, they offered a taste of their culinary ability that will be hard to surpass on 6 November when they create an innovation of the same dish. An international jury panel, chaired by the “Lady of the Greek cuisine” Argiro Barbarigou at the European Young Chef Award 2017 will decide the winner. Today’s meeting, offered the opportunity for the finalists to explain their cultural background and the traditional dishes that have inspired them. This framework gave them the opportunity to share their knowledge and the peculiar features of their local culinary traditions.

The aims of the Award are to promote innovations on traditional cuisine, to highlight sustainable food cultures and to create future ambassadors for local food products.